Internet advertising has reached a major milestone, passing the 50% mark of all UK advertising by value to become the single majority method used in British marketing.

Figures from the Internet Advertising Bureau UK and PricewaterhouseCoopers show that in early 2009, internet advertising accounted for about a quarter of UK marketing spend.

This gave the sector a value of just under £1.8 billion, according to an infographic by digital marketing group Be Heard. 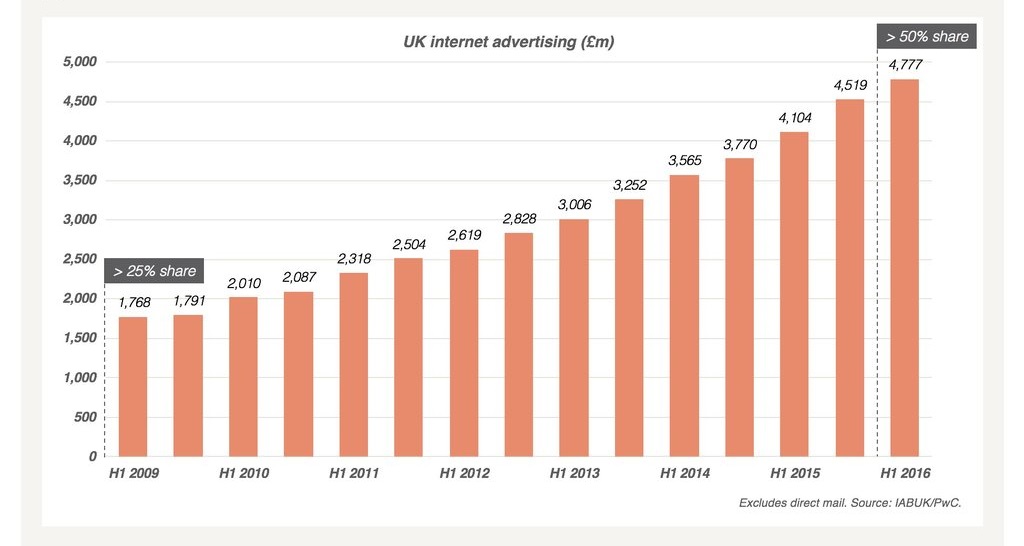 As of the first half of 2016, UK internet advertising expenditure passed the £4.7 billion mark – and crucially, this gives it more than a 50% share of total British marketing spend.

The figures exclude direct mail, but other than that the inescapable contribution internet advertising makes to the overall marketing mix is clearer than ever before.

British companies now make the internet their majority method of reaching out to new customers – testament to its universal benefits for companies big and small.

For the largest brands in the country, internet advertising is a way to compete against major rivals, for example by bidding on branded PPC terms to reach rivals’ customers in their sponsored search results.

And for small companies it levels the playing field, whether bidding on those same big-money terms, or using more generic PPC keywords to cash in on niches that would be hard to target via other methods.

In organic search there are options too, for example for SMEs to target long-tail keywords that tap into those niche markets that are neglected by the big brands, but which yield highly relevant search traffic.

The figures raise a further question – just how high can internet advertising go? From a 25% market share in 2009 to a majority stake in just seven years, there is no sign of the chart hitting a plateau as yet.

With an uncertain economy in the years ahead, the percentage could yet rise substantially, as more companies capitalise on the fast returns and in-depth analytics offered by online advertising, rather than relying on old marketing methods to turn a profit in turbulent times.

Your infographic is invisible, here’s how to fix it

Don't let high value infographics fall to the wayside on some long-forgotten landing page. Here's how to promote them online.

PageSpeed: Will your website pass Google’s next algorithm update?

Just what is the Core Web Vitals assessment and how is your website going to be impacted in coming months?

How To Enable Site Search Tracking in Google Analytics

Understanding what users are looking for when visiting your website is key to improving user experience.