Cyber-attacks strike again… But what can you do about it?

First Internet/Blog/Cyber-attacks strike again… But what can you do about it?

Last month, our developer Joe wrote about the ‘WannaCry’ attack, which caused a crisis in the National Health Service hospitals and some of Europe’s biggest businesses, affecting 230,000 computers in over 150 countries. In the past 24 hours, many companies across the EU and US have been victim to another ransomware attack, this time, named ‘Petya’. This is the second major cyber-attack that has happened in the past two months and is continuing to spread across the world.

After crashing the device, victims of this particular ‘Petya’ malware attack are being asked to pay a $300 ransom in order to restore data and files. So far, it is reported that the operators have received 27 payments totalling almost $7,000 worth of ‘BitCoins’ (a digital currency) within around five hours.

To help you understand a little more about ransomware and how you can best avoid being affected by an attack, we’ve put together a guide to cyber-attacks for you!

So, what exactly is ransomware and how does it work?
Ransomware is a type of malware that can spread rapidly across devices within an organisation. It encrypts access to data from a device and requests money in order to release information back to you.

What should I do if I’m a victim of a cyber-attack?
In the case of the ‘Petya’ attack, the ransomware infects the device before waiting around an hour before restarting… If you see the below error message, you should switch the computer off to prevent files being infected, allowing time for you to try and recover the files prior to them being encrypted, as long as you do not switch the power back on. 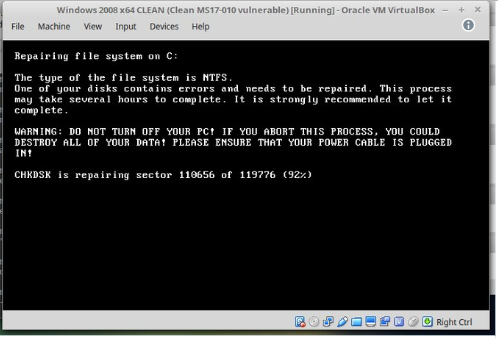 However, in the case of ‘Petya’, if the device does restart with a ransom note, you are advised to not pay the ransom as the email address detailed has been shut down, so those responsible for the attack will have no way of getting the decryption key to you to unlock files. In this case, you should disconnect from the internet immediately, reformat your hard drive and reinstall your files from a backed-up version.

How can I protect myself against a cyber-attack?

Ensure your protection software is up to date:
Most antivirus companies have made claims that their software actively detects and protects against such attacks. Keeping Windows up to date can also help support the vulnerability of your device and can help protect against further potential attacks.

Don’t click on anything suspicious:
Phishing emails can often be the cause of attacks on computers, and are designed to look as genuine as possible to encourage you to click on them. It’s important that you understand what one of these emails may look like, by checking for any typos, suspicious-looking email addresses and names can help you identify a suspicious email.

Change your security settings when using public Wi-Fi:
Using public Wi-Fi network can open you up to a range of security risks, so it’s important that you ensure that you are not viewable on such networks. By using a VPN (viral private network) it can hide your computer from those using a public network… It isn’t going to fight the malware, but it will help to avoid you being targeted.

Although these attacks are mainly targeted at large organisations, it’s important that all consumers remain cautious and understand the main things that can help you avoid being targeted.

If you’re worried about your online security or have any questions about how you can best prevent a cyber-attack on your company, get in touch with the First Internet today!

Protect your revenue and reach your customers online

The nation might be in lockdown but that does not mean business has to stop. While business may not be able to carry on as “normal”, now is the time ...

WordPress Security: Are You At Risk From Hackers?

WordPress is the biggest and arguably best CMS out there today, but is it safe from hackers? Moreover, how protected is your WordPress website?

Get ahead of Google and switch up your site speed

The importance of site speed to SEO is even more pressing now Chrome will identify slow or fast loading with clear badges...