After a delay due to unexpected demand, the wildly popular app Pokémon Go can now be downloaded in the UK. Over 15 million people have downloaded the app since its launch last weekend – such huge volumes caused the servers to crash – but you can now relax, it’s finally here!

I’m not sure anyone imagined quite how much interest the app would attract, it is already making an estimated $1.6 million dollars, (which is around £1.2 million) a day from IPhone users in the US alone. This is great news for Nintendo after their shares rocketed by almost 50% in the last week.

Pokémon Go now has more daily users than popular apps such as Twitter and Netflix. The game is expected to continue to grow and become more popular over the coming weeks, and if the trend continues it’s poised to take over snapchat. App popularity graph below: 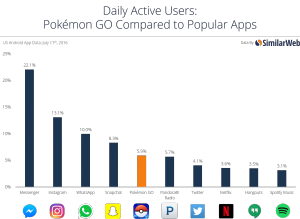 What does this all mean for marketing I hear you ask? Companies are now using this craze to attract customers to their shops across the world.

L’inizio Pizza Bar in Long Island City in New York has today released some figures to claim their sales have jumped 75% over the weekend by activating characters at the shop to attract users. It’s claimed the store manager spend $10 to have a dozen characters placed in and around the shops location.

Virgin Media Australia are offering customers the chance to charge their phone for free to save the ‘juice’ for catching Pokémon characters.

We’re intrigued to see how creative people get with Pokémarketing! If you’d like us to get creative with your marketing campaign pop in to see us, who knows, there may even be a few Pokémon about!

Your infographic is invisible, here’s how to fix it

Don't let high value infographics fall to the wayside on some long-forgotten landing page. Here's how to promote them online.

PageSpeed: Will your website pass Google’s next algorithm update?

Just what is the Core Web Vitals assessment and how is your website going to be impacted in coming months?